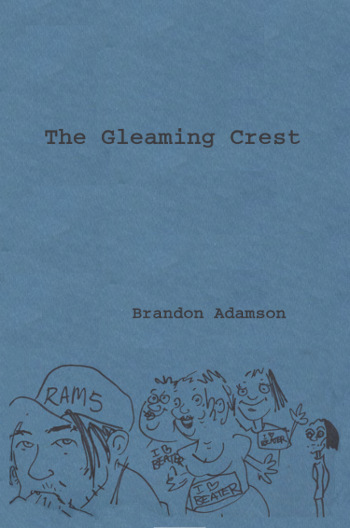 Purchase “The Gleaming Crest” on Amazon

“The Gleaming Crest,” a recently unearthed book of poems I wrote in 1995, is now available on Amazon. At only about 35 pages, its fairly short. Basically it’s a chapbook. The book was written mostly in the summer after my junior year in high school, partially through my senior year in the fall/winter. However, these weren’t for any kind of class. I actually wrote poetry on my own and would constantly send it out to magazines for publication, with some success. Several of the poems in this book appeared in magazines and literary journals (PLAZM Magazine, The San Fernando Poetry Journal, and Tight Magazine Literary Quarterly.) Comically, I used to shamelessly send poems such as The Gleaming Crest to (then) prestigious magazines like The Atlantic Monthly and Cosmopolitan. I should also mention that this book features some early artwork (the cover and a couple of interior illustrations) by Los Angeles based artist, Mark Schoenecker. More than two decades ago in my final year of high school, he was my partner in crime. We also reunited a few years later to have many precarious adventures in Los Angeles.

Many of my early poems were hamstrung by my attempts to basically LARP as a “sensitive poet” (though as was the case with Birthday Boy, this was done with some self awareness and a subtle irony.) I would use grandiose language and titles that sounded like how I imagined poets to sound. Poems like The Lonely Beach and Otters in the Sea are some of the most egregious examples of this, though I guarantee you I was quietly smirking to myself at the time I wrote them. When I was 17 I wore a teal turtleneck and thought of myself as a 90’s poet / theater kid. My senior year of high school I had prominent roles in four plays (A Few Good Men, The Second Shepherd’s Play, Choices, and The Dining Room.) In fact, the kid who played the main lead in our stage production of A Few Good Men actually went on to become a fairly well known television actor: Joel Johnstone (though he appears to have at some point creatively revised his date of birth to appear several years younger.)

Anyway, so I was an angsty, nauseatingly romantic teenage creep with a flair for theatrics and lot of megalomaniacal dreams. Not much has changed I guess, aside for the fact that I’m much older and demonstrably less romantic. “The Gleaming Crest” interests me now because of what it represents. When I wrote it, I was a young adventurer just beginning his RPG quest, about to head up the mountain toward some shiny, sparkling dream. So even though it’s a just an amateurish teenage poem, it represents something I can still relate to. I’m further along the “journey” now, which seems as pointless as ever. Yet, I am still drawn to that gleaming crest and still plodding along just the same.

I don’t really hold very many of these poems in any kind of high regard. This book is really of interest to “completists” who have been familiar with much of my writing and would like to get a glimpse of some of my early, formative work. One can even detect in this book where I started to escape the cliche trappings and develop my own voice. The poems are not in chronological order, but readers of my other books should be able to tell that poems like A Fearless Stare and The Lonely Beach don’t resemble my style at all, while Computer Animated Glass Sphere and Cereal Boy seem like something I could have written just last week, (both in form and subject matter.) Yes, the same old familiar themes of nostalgic futurism could be found in my writing even in 1995. In addition to “completists,” this book may also appeal to anyone with a passing interest in 90’s underground lit and zine culture. This was made in the days of golden age of Kinko’s copy machines, and I recently had to retype the entire book because it was so old that it was in a manilla file folder and had never even existed as a digital document. The Gleaming Crest also features painfully dated references to things like “Caller ID” and even an Aptiva commercial.

The poem in the book I’m most proud of is Cereal Boy (which appeared in PLAZM Magazine in 1996.) The concept of running into an old friend who blows you off or has otherwise changed and acts differently toward you is something which still resonates with me today. I cannot tell you how many times I’ve experienced this in my life, and I don’t think I could ever convey it more sincerely or more creatively than I did in that one brief poem.

There’s not much else to say except that The Gleaming Crest is an obscure 90’s literary “gem.” It deals with cliche themes of adolescent angst, grandiose dreams, romance and coming of age…all of which are briefly addressed with a combination of immaturity, nostalgia (yes I was already nostalgic for 1993 as early in 1995) and precocious grandstanding.

“The Gleaming Crest” is available in paperback from Amazon