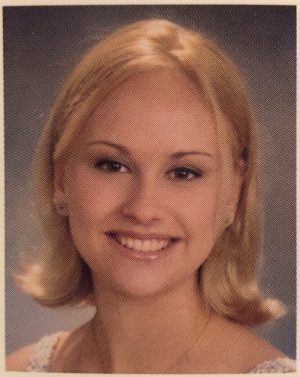 For many years I wondered what ever happened to Elizabeth, my old friend Andrew’s high school girlfriend. Like it was yesterday, I can still remember the three of us driving around in the summer and fall of 1997 in my black ’87 Ford Escort EXP, a car which, while prone to breaking down at the most inopportune times, nevertheless by some miracle managed to get us to Tempe and back on several occasions to see bands play at once iconic (now long defunct) establishments like Gibson’s, Boston’s and Electric Ballroom. I’m not even going to write about the more scandalous and amusing shenanigans that occurred on some of these adventurous car rides, because well, let’s just say those were innocent times and leave it at that.

Elizabeth was a very pretty girl, way too pretty to be hanging around with Andrew and I, but lucky for us, I don’t think she was aware of that. I don’t remember having a “thing” for Elizabeth myself, but I do recall being envious of Andrew for having a girl like her, just a beautiful and normal looking blonde Phoenix girl, unlike so many of the troubled skater and raver girls I had always managed to end up cavorting with. Elizabeth was always kind and friendly. She never seemed to talk badly of anyone.

One night I gave Elizabeth a ride home from Andrew’s house, and it was just her and I. She was complaining to me about how Andrew wasn’t being “affectionate” enough, and she wondered if she was “going to have to get her needs satisfied elsewhere.” I won’t go into detail, but she went on and on in such a way that for a brief moment in my deluded young mind, I wondered if perhaps this was some kind of signal that she wanted me to make a move or something. I highly doubt it was though, and I quickly dismissed whatever impulse I may have had and dropped her off at home without doing anything stupid.

One thing I did do was endlessly pester her to hook me up with her friends. I didn’t deserve such charity, but Elizabeth was good natured enough to entertain my requests anyway. This almost ended up panning out. She had an attractive friend named Michelle whom she made an effort to set me up with. However, when the four of us hung out at my apartment one night, a rather annoying guy tagged along as “the fifth wheel.” Even though Michelle and I were only inches away from one another on my bed, I never got the chance to be alone with her, to find out one way or the other if anything was going to happen. That was that.

I lost touch with Andrew and Elizabeth not too long afterwards, and from what I remember they broke up a year or two later. Andrew and I are forever bonded though by an incident which occurred in October of 1997, when the two of us were robbed at gunpoint outside the movie theater (which no longer exists) on 32nd St and Bell, after seeing the film, The Devil’s Advocate. Neither of us had any money in them when we handed over our wallets, but on the tense drive back, Andrew bemoaned to me that he had pictures of Elizabeth in his.

Anyway, fast forward to the present. I always wondered what happened to Elizabeth and what she was doing with her life now. I never was able to look her up, because I didn’t remember her last name. You see, back then there was no social media, so a lot of your friends and acquaintances you would only know by their first name, sometimes even a nickname. To this day there are people I used to skateboard with that I will never be able to reconnect with because they were only known locally by outlandish monikers like “Bugle” and “Turbo Chris.” Believe it or not, some of them still have never learned to use the internet either.

Of course, I could have just asked around and found out from someone what Elizabeth’s last name was, but I suppose that would have been too easy and logical. Tracking down Andrew and asking him what his ex-girlfriend’s last name was would have been kind of awkward. Nevertheless, by chance a few days ago, I accidentally discovered she had a profile on Facebook. When she left my friend request on “pending,” I assumed that maybe she didn’t recognize or remember me after all these years. An even worse possibility was that she did remember me and just thought I was a douchebag or something. Social norms have changed a great deal since then, and it wouldn’t be the first time I remembered a girl fondly who didn’t share a mutually idealized recollection of me. So I began to wonder introspectively, just how much of a jerk I had been, how much of a creep I was all those years ago that Elizabeth would be unwilling to entertain the idea of merely saying hi.

I guess I will never know what she thought. I found out from a friend that Elizabeth passed away a few years ago after she fought a tough battle with cancer. She was only in her early 30’s. The way that I remember Elizabeth from the time I knew her, I would have thought she’d live to be a hundred years old. Elizabeth was one of the coolest girls I’ve ever met and animated with vitality. Maybe it’s tasteless to write this kind of tribute to someone who isn’t a celebrity or in the public eye (hence the reason I’m not using people’s full names.) Elizabeth deserves a tribute though…so here it is: Think about what an amazing impression Elizabeth left on the world, that years after she was gone, people would still be wondering what she was up to, remembering things she said, and hoping to reconnect with her. I only knew her briefly 20 years ago, and yet I would have been so excited just to run into her somewhere or talk to her online for like five minutes…and I’m sure I’m not the only one. It wouldn’t have even mattered to me what she looked like now or what sort of condition she was in. If she only knew how thrilled I was when I thought I’d finally found her. I was nervous even when I tried to send her a message!

One of the best things one can hope for is to be remembered fondly after they’re gone. It’s not fair that Elizabeth lost her life prematurely. It doesn’t make any sense at all. Clearly though, Elizabeth lives on in the minds of those who were fortunate enough to know her. Wherever you are, we’re reliving the good times with you a thousand times over. RIP Elizabeth, aka “Lizard Breath.”

← Pageless Wonders
A Glow In the Dark Neverland →